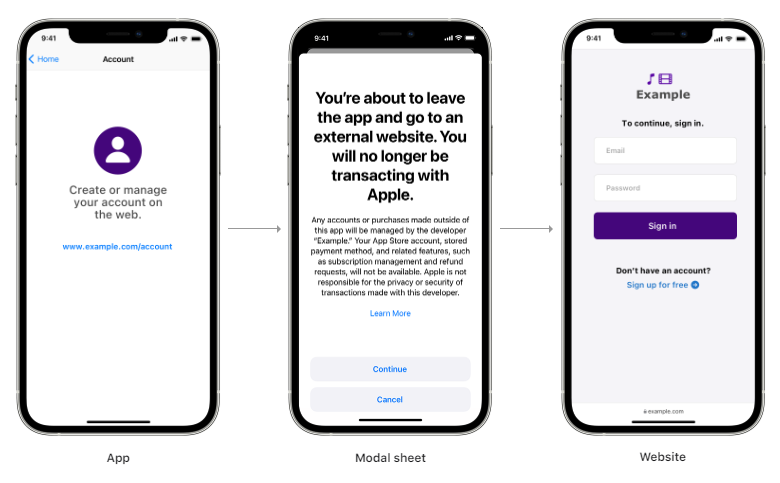 Apple today announced it will begin to allow a subset of applications sold on its App Store to link to an external website where users can create or manage their accounts with the app developer. The change to Apple’s App Store Review guidelines only applies to what Apple calls “reader” apps — meaning, apps designed primarily to provide access to some sort of digital content, like magazines, books, audio, music or video. Apple’s plans were first announced last September in the context of the tech giant’s settlement with a Japanese regulator, the Japan Fair Trade Commission (JFTC), and had been set to arrive sometime in early 2022.

Today, Apple’s App Store Review Guidelines have been updated with a new reference that explains how Reader apps can implement this feature.

Specifically, Apple instructs developers to apply for something it calls the External Link Account Entitlement in order to provide this functionality in their own apps. An entitlement is something Apple uses when it wants to still have control over the situation in terms of which developers can implement a certain feature. That is, instead of just changing the App Store rules so this type of behavior is broadly permitted for apps in the supported category, the entitlement process requires developers to ask and then receive approval for this special use case. This way, Apple can very carefully vet the apps being allowed to add the links instead of leaving it up to its App Review team.

The company also published usage guidelines and implementation details for developers who are approved to use the external link option. Here, Apple explains that not all apps that offer access to digital content will be approved — the access to digital content has to be the app’s “primary functionality,” Apple states. For instance, a social networking app (ahem, Facebook) where users can also stream videos would not be eligible.

Apple also says that, in order to be eligible, the apps must allow the users to access content or services they had previously purchased outside the app; they must allow people to sign in to their account; and they cannot facilitate real-time, person-to-person services — like live tutoring, fitness instruction, real estate tours or medical consultations.

Though Apple has opened up access to request the External Link Account Entitlement today, it notes the API will be available for reader apps to build and test in an “upcoming beta release of iOS and iPadOS.”

Calculator – A clone of the Apple Calculator on SwiftUI

A clone of the iconic Apple Calculator developed with SwiftUI. This is the product of a tutorial series I published...

Welcome to Now in Android, your ongoing guide to what’s new and notable in the world of Android development.

Projects are available now on GitHub.

Over 100 videos from droidcon Berlin. The conference was held in early July, and now the records of all reports...