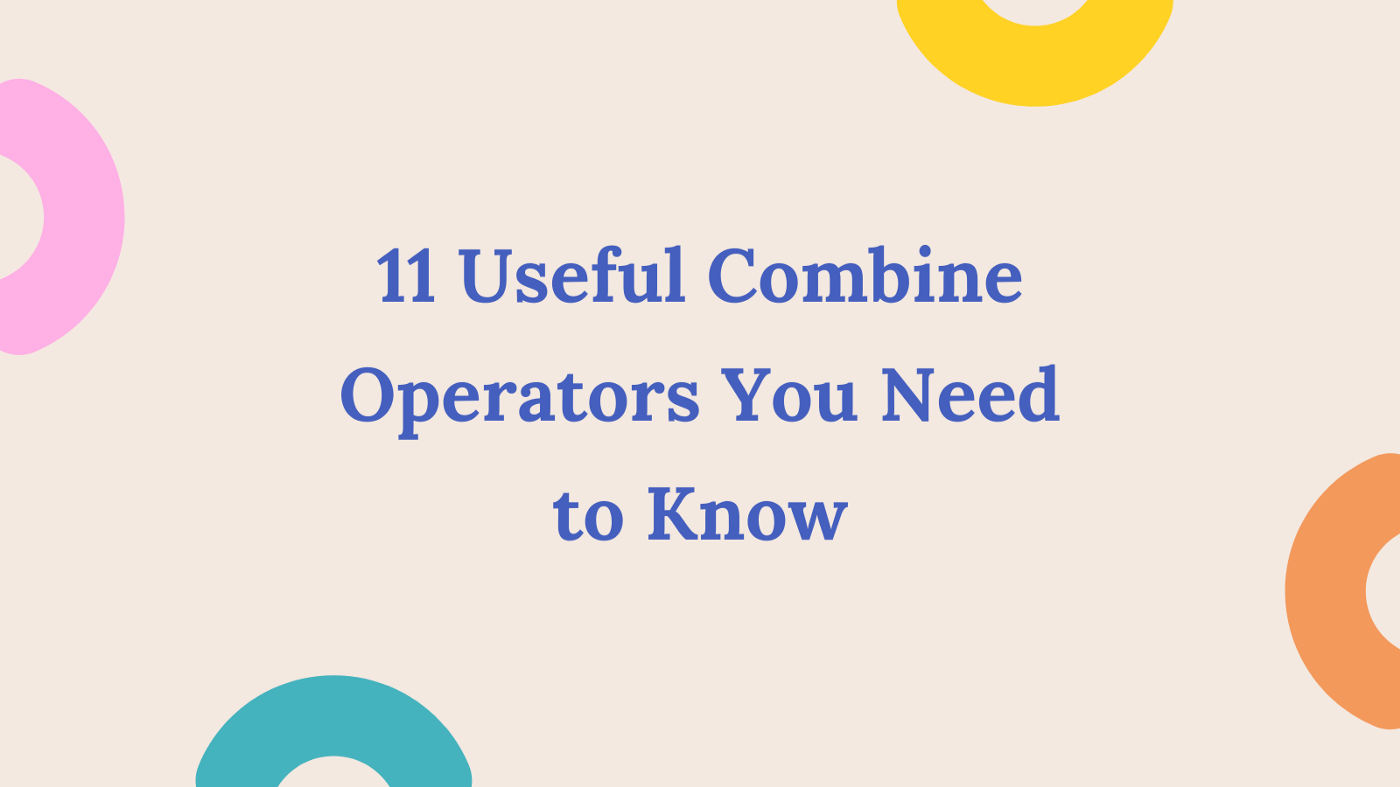 Hello guys, You may already be aware of the Combine framework which provides a declarative Swift API for processing values over time.

Today we will explore the 11 very important Combine operators with examples and graphical representation.

What is an Operator in Combine?

Combine declares publishers to expose values that can change over time, and subscribers to receive those values from the publishers. And the methods that perform an operation on values coming from a publisher are called operators.

Each operator returns a publisher that, receives the values, manipulates them, and then sends them to its subscribers.

This operator prepends or adds values at the beginning of your original publisher.

For example, here we have an array publisher and are performing prepend operation to add value at the beginning of the array.

Here, the result must be the same type as items i.e if you have the publisher of Integer, you can not get String as a result.

Similarly, we have the Append operator which works the same as Prepend with the difference that it appends values after the original publisher.

It replaces nil items with the values we specify.

For example, we have one publisher that contains a nil value and we want to replace that nil value with our defined custom value.

As a result, we can see that the nil value is replaced with the given number 5.

An important difference between ?? and replaceNil(with:) is that the former can return another optional, while the latter can’t.

We can only use it on publishers that themselves emit publishers.

What happens is that each time you send a publisher through publishers, you switch to the new one and cancel the previous subscription.

Consider a real-world example where we have a search text field that is used to detect if an item is available. Once the user inputs something, we want to trigger a request. Our goal is to cancel the previous request if the user has inputted a new value. This can be done with the help of .switchToLatest.

This operator combines two Publishers as if we’re receiving values from just one.

As shown here, we can see that all values print as a single stream publisher.

Note: Here, it requires that both publishers must be of the same type.

It combines different publishers of different value types. The emitted output is a tuple with the latest values of all publishers whenever any of them emit a value.

Before .combineLatest emits something, each publisher must emit at least a value.

As shown here, the original publisher combines with the latest value of another publisher and makes combinations accordingly.

Consider a real-world example where we have a phone number and country name UITextFields and a button for allowing us to go ahead with the further process. We want to disable that button until we have enough digits of a phone number and the correct country. We can easily achieve this by using the .combineLatest operator.

It works similar to the .combineLatest but in this case, it emits a tuple of paired values in the same indexes only after each publisher has emitted a value at the current index.

As shown here, only two zipped items are emitted from the resulting publisher as subject1 has only 3 items. That’s why the Awesome value is not printed, because there’s no item to pair it with in subject1.

As the name suggests, this operator maps or transforms the elements a publisher emits.

It uses a closure to transform each element it receives from the upstream publisher. We can use map(_:) to transform from one kind of element to another.

Here, we can see that publisher values are mapped one by one and are multiplied by two as we specified.

It is a powerful operator that allows us to receive all items at once from a publisher. It collects all received elements and emits a single array of the collection when the upstream publisher finishes.

Here, we can see that publisher values are displayed as a single element.

Note: If we don’t use .collect() operator here then it will simply print as a separate element in a new line instead of a single array.

This operator iteratively accumulates a new value based on the emissions of the upstream publisher.

It returns the publisher that applies the closure to all received elements and produces an accumulated value when the upstream publisher finishes.