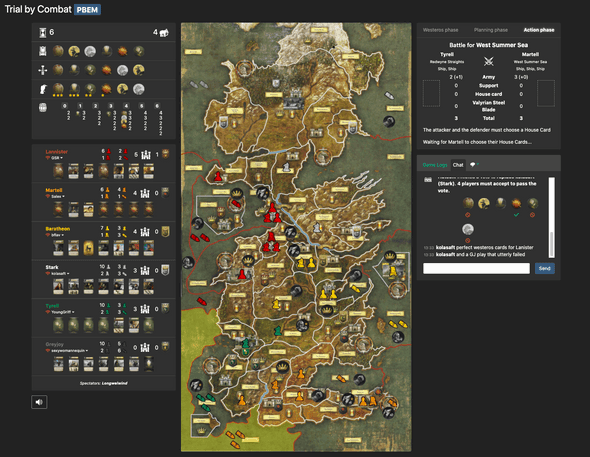 3 years ago, I started developing Swords & Ravens, an open-source online multi-player adaptation of a strategy board game I love, A Game of Thrones: The Board Game (Second Edition), designed by Christian T. Petersen and published by Fantasy Flight Games. As of Febuary 2022, around 500 players gather daily on the platform and more than 2000 games have been played since its release. While I stopped actively developping S&R, the platform is still seeing new features being added thanks to the work of the open-source community.

I’ve learned a lot while developing S&R, and I wanted to share some of the knowledge I’ve gained to people that might be interested in doing a similar project. There is a lot to say about how it works but this blog post will focus on how I’ve designed the networking part of the game. I’ll first describe the problem in a more formal way. I’ll continue by explaining how it’s solved in S&R, as well as describe other possible solutions that I’ve discovered or imagined. I’ll detail the advantages & disadvantages of each method and conclude with which method I think is the best (Spoiler alert: it’s the last one