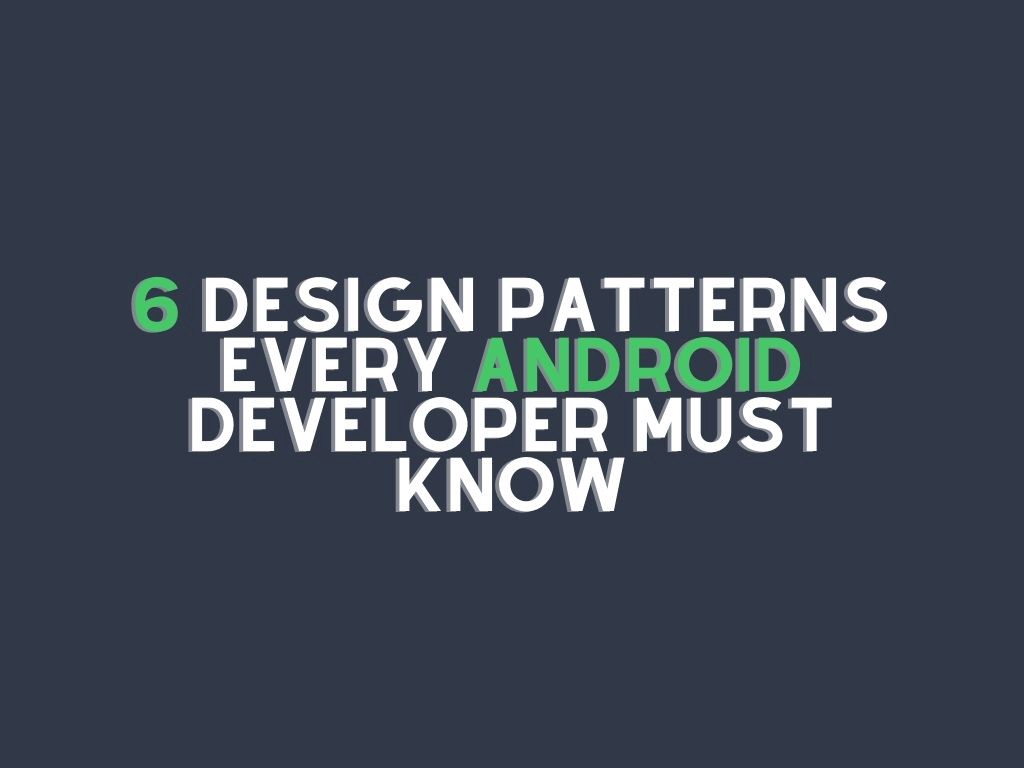 This is the most important design pattern for you as an Android developer.

What Does Design Pattern Mean?

A singleton is a class that allows only a single instance of itself to be created and gives access to that created instance. It contains static variables that can accommodate unique and private instances of itself. It is used in scenarios when a user wants to restrict the instantiation of a class to only one object. This is helpful usually when a single object is required to coordinate actions across a system.

Rules for making a class Singleton

The following rules are followed to make a Singleton class:

Following is the example of Singleton class in java:

Following is the example of Singleton class in Kotlin:

As the name suggests, Factory takes care of all the object creational logic. In this pattern, a factory class controls which object to instantiate. Factory pattern comes in handy when dealing with many common objects. You can use it where you might not want to specify a concrete class.

Take a look at the code below for a better understanding:

Rules for making a Builder class

The following rules are followed to make a Builder class:

Following is the example of Builder class in Kotlin:

The Facade pattern provides a higher-level interface that makes a set of other interfaces easier to use. The following diagram illustrates this idea in more.

Square’s Retrofit is an open-source Android library that helps you implement the Facade pattern. You create an interface to provide API data to client.

Dependency injection is like moving into a furnished apartment. Everything you need is already there. You don’t have to wait for furniture delivery or follow pages of IKEA instructions to put it together.

In software terms, dependency injection has you provide any required objects to instantiate a new object. This new object doesn’t need to construct or customize the objects themselves.

In Android, you might find you need to access the same complex objects from various points in your app, such as a network client, image loader or SharedPreferences for local storage. You can inject these objects into your activities and fragments and access them right away.

Here’s an example. Without dependency injection, representing a Car that creates its own Engine dependency in code looks like this:

This is not an example of dependency injection because the Car class is constructing its own Engine. This can be problematic.

What does the code look like with dependency injection? Instead of each instance of Car constructing its own Engine object on initialization, it receives an Engine object as a parameter in its constructor:

The adapter pattern works as a bridge between two incompatible interfaces.

This pattern involves a single class which is responsible to join functionalities of independent or incompatible interfaces. A real life example could be a case of card reader which acts as an adapter between memory card and a laptop. You plugin the memory card into card reader and card reader into the laptop so that memory card can be read via laptop.

To dive deep in adapter design pattern check this article.

iOS SwiftUI Lists Are Broken And Can’t Be Fixed Swift Combine: Understanding Publisher-Subscriber Pattern in 2 seconds How to Create...

Dotlin is a Kotlin to Dart compiler. The aim is to integrate Kotlin as a language into the Dart ecosystem,...

A lightweight Compose Animation utility library to choreograph low-level Animation API through Kotlin DSL. It does the heavy lifting of dealing...